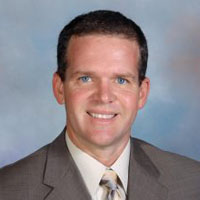 Dr. Curtis Case currently serves as the Director of Digital Learning for Millard Public Schools in Omaha, NE. Prior to serving in his current position, he served as an Assistant Principal for 5 years in Millard and 8 years as the Principal of Millard South High School. He has over 25 years of educational experience in several states, urban and rural school districts, private and public schools, K-12, and post secondary institutions.

On Jan 5, 2011, Millard South High School was the sight of a school shooting where assistant principal, Dr. Vicki Kaspar, lost her life and principal, Dr. Case, was shot twice. Dr. Case recovered from his injuries and continued to serve as Millard South’s principal until the graduation class of 2014.

As the Director of Digital learning, Dr. Case is helping lead the implementation of the District’s Strategic Plan on Digital Learning. In addition, as a result of the school shooting in 2011 and subsequent tragedies like that of Sandy Hook, $5 million of a recently passed school bond was dedicated to school safety and security. He was tasked to see oversee the completion of the security bond project that has included physical changes to district 2 of 4 facilities, an integration of security related hardware and software, training of staff, as well as access control systems and alarm monitoring/response. Dr. Case also serves on Nebraska’s AdvancED State Council and served on AdvancED’s National Commission Board. He leads and serves on several AdvancED external review teams each year.

Dr. Case is a well-respected educational leader who is known for his passion and concern for kids and education. He understands that a child’s safety and genuine relationships are equally important to best instructional practices when trying to raise levels of achievement and engagement in a school. He is quick to credit his students, faculty, and families for any successes or recognition he has received. Below are some of his recent recognition: