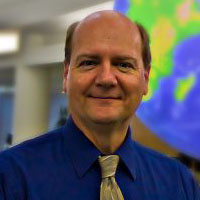 Kevin is responsible for providing weather forecast and weather safety information to the OU Office of Emergency Preparedness before, during and after weather threats of all types on the OU Campus. He also provides support to the OU Executive Policy Group in severe and winter weather situations in order to facilitate campus protection and closure decisions. He develops and leads high-impact weather safety training on the OU campus for its over 30,000 students, faculty and staff, and for the over 40,000 pre-collegiate students that call OU home during summer sports and academic camps.

In addition, Kevin serves as Director of the Oklahoma Climatological Survey, one of the largest such Surveys in the country. OCS is charged with providing weather and climate data, analysis and expertise to stakeholders and decision makers throughout the state, and operates the Oklahoma Mesonet weather observing network. He also serves on the State of Oklahoma Hazard Mitigation Task Force.

Kevin is a tenured Associate Professor with teaching and research interests ranging from synoptic meteorology to societal impacts and decision-making in weather-impacted situations. He led the teams that won the Innovations in American Government Award from Harvard University and the Ford Foundation for their work with the emergency management community in Oklahoma, as well as awards from the American Meteorological Society and the National Weather Association. Kevin was awarded the American Meteorological Society’s 2015 Charles E Anderson Award for “over two decades of dedication to engaging minority and underrepresented groups through community outreach and academic leadership.”

Kevin works directly with thousands of K-12 students and teachers, as well as hundreds of emergency management agencies in finding appropriate applications for weather data in local education, decision-making, and weather safety planning. He has provided numerous training workshops to improve weather forecasting and decision making in Korea, China, Japan, Taiwan and Nigeria, as well as weather preparedness training to the NFL, NCAA, NASCAR, and numerous sports venues, concert halls and amusement parks throughout the country.

A frequent guest on local, state and national radio and television programs, he has appeared on the National Academies of Science Distinctive Voices, NPR’s Talk of the Nation, the Tavis Smiley Show, WeatherBrains, ABC Nightly News, The Discovery Channel, The Weather Channel, WxGeeks, the BBC, and dozens of local radio and TV shows from coast to coast. He has also provided keynotes at the National Tornado Summit and the SXSW Eco Conference. He has served on two National Academies of Sciences panels reviewing weather forecast performance for the nation, and works closely with the Norman Chamber of Commerce and Norman Economic Development Coalition to provide support for the growing private weather and climate enterprise in Norman. He also served as a content designer for Scholastic’s The Magic School Bus Kicks Up a Storm children’s museum exhibit that is currently touring the US. Kevin formerly served as an Associate Dean and led the National Weather Center’s outreach, tour and visitor programs from 2006-2014.

While a tenured faculty member at Florida State University, he served as a research fellow with the Cooperative Institute for Tropical Meteorology, and co-directed an outreach project, EXPLORES!, which provided NOAA satellite data ingest capabilities to over 200 schools throughout Florida, as well as opportunities to fly teacher-developed payloads on NASA’s Space Shuttle.